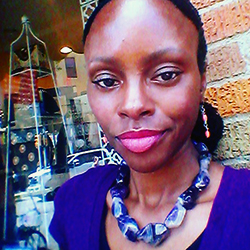 Y’vonne Page-Magnus a native of Philadelphia has a passion for the Arts and acquired an ‘Associates Degree’ in Fashion Design where she began designing beautiful button bracelets for boutiques in the for ‘Rittenhouse Square.’ Y’vonne also studied at ‘AIU’ in London, England where she received a BA in Fine Arts. After graduating Y’vonne worked as a graphics designer and Illustrator for the ‘Philadelphia Tribune’ and the ‘African American Museum of Philadelphia.’

While living in New York Y’vonne worked for ‘Barney’s’ department store in New York where she became fascinated by semi-precious stones and began making jewelry for boutiques. In 2003 she returned to London and launched ‘Von & Magnus’ with her Partner a Limited Corporation Jewelry Company in the U.K. Sourcing beautiful semi-precious stones in ‘Rue Du Temple’ Paris, France eventually opening concessions in ‘Fenwicks’ and ‘Harrods’ department stores. After introducing Restring/ Renew/Repurpose’ and receiving a write-up in the ‘London Times,’ the little quintessential Company became the go-to place for costume jewelry repairs. Celebrities began using the services such as ‘Nina Garcia’ from ‘Project Runway’ and, the Editor of ‘British Vogue.’